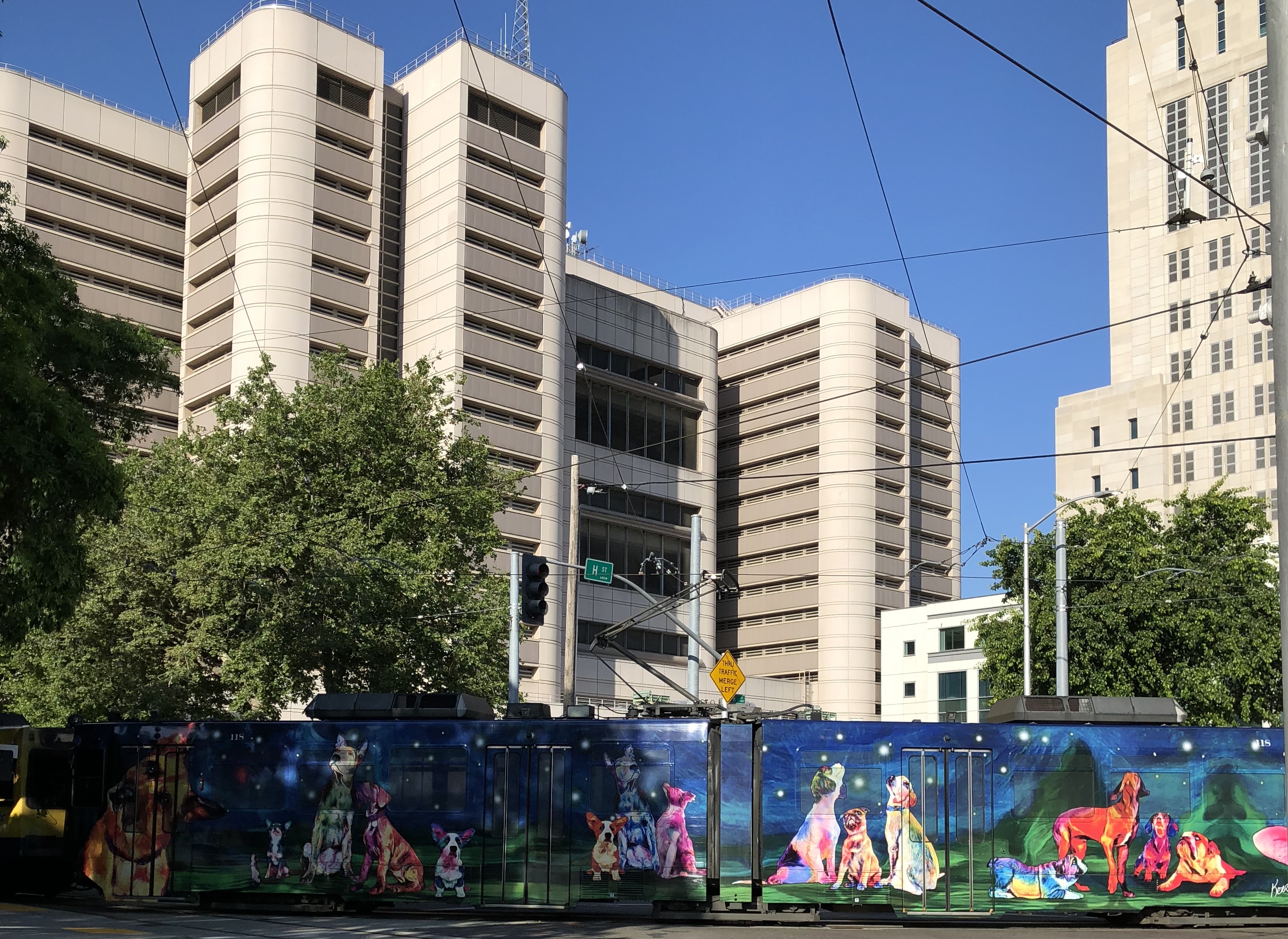 I knew it would be tough to sleep. I felt the dread building into the evening and so I decided half a Xanax would help. Not so much. When the clock flipped to 1:30am, I was still talking to myself. I need sleep. I have to be up early. I was afraid the alarm wouldn’t ring; the traffic into Sacramento would be awful, I’d be late and miss the whole thing. At some point after that, I finally fell asleep. Morning came fast.

My instructions were to meet my Victim Services person at 8:15am at the H Street garage. Somehow I managed to get there a few minutes early and that gave me a chance to get a bit nervous. Ann showed up on time and away we went, to Superior Court, Department 61.

I didn’t realize the court room was part of the jail. I was whisked through security, reminded to turn off my cell phone and walked down a long hall full of reporters. As I snaked my way down the hall, I could hear regular people asking the reporters what the heck was going on.  “East Area Rapist case,” was the typical response. It was 8:25am when we walked through the doors of the courtroom. Inside were only victims/survivors (I’m going to need a really good name for the fierce folks who were part of this group).

I wanted to notice as many details as possible.

The courtroom was small. I found a photo online but our room had the reverse orientation – we were seated on the right and the cage (!) was on the left side of the room. It was outfitted in standard 1970s decor (real wood? fake wood?) and utilitarian carpet. Large calendars were on the wall with days marked out – holidays, weekends. A clock was on the left near the back wall and I watched the time slowly move amid the commotion.

I was in the first seat in the front row. Seated next to me was the woman who was raped on June 18th. I don’t remember her name, but I will always remember her face. She was simply beautiful. She was also nervous and she brought her best friend for moral support (she actually said “moron support”, which was a laugh we really needed). I met a close friend of Debbie Domingo who I need to know more about (note to Debbie!). She was a spitfire and brought photos of the victims to hold up. There were two more folks next to her and again, in the melee, I didn’t hear names very well. Either way, I’d protect their privacy here anyway.

Everyone else was held outside until a little before 9am. The attorneys trying the case, the prosecutors, introduced themselves. [I am going to find out their names because they told us but we didn’t have a way to write things down. I will update when I get the names.] She was dressed in a black sheath dress and a jacket and simple string of pearls. I noticed because it was in contrast with DeAngelo’s attorney who was in a red sweater/jacket, black slacks and silver necklace. They both looked very put together and prepared. [Honestly, I want to smack myself for commenting on the women’s attire – but I found the fashion choices interesting and clearly intentional.]

The most striking thing in the room was the cage. You can see it in the courtroom photo (here’s another angle, his wheelchair is in front of the cage here).  It is an imposing site. It’s a cage with a lock on the front that needed a key to open the barred door. The bars were thick steel and then, as if someone said, “Can’t we make this fit the motif?”,  some paneling was added to the sides so, you know, it would bring the whole room together. The cage was empty and it was intimidating. I couldn’t imagine what kind of criminal would need something so substantial. Unless someone was mid-Meth trip, I couldn’t imagine someone needing that level of security.

As members of both legal teams, bailiffs and court staff moved easily from the courtroom to the backroom, we assumed that’s where DeAngelo would come from. I thought they would walk him out and lock him in the cage and we’d get started. But I was wrong.

The bailiff read the rules (no noise, cameras, recordings, cell phone noises, etc) and in a jiffy, the judge entered the court. I’m not sure what he said because suddenly the lawyers for the defense jumped up, moved toward the cage and that’s when I realized there was a door that opened into the cage and it was through that door, DeAngelo entered.

The defense team used their bodies to create a wall between DeAngelo and us. All I could see at first was what appeared to be orange Crocs (actually, you can see them here when he was wheeled in before).  He was standing. I followed the bright, orange shoes up the matching orange legs and then couldn’t see anything. He was effectively blocked. At the same moment I heard that door open, I had grabbed for the hand of the brave woman sitting next to me. I knew it had to be horrifying to see him there, in front of her, after all these years. We held hands the whole time.

The judge listed off what seemed like a rather significant number of motions and responses and one caught my attention. There was a lawyer there representing the media: I believe the New York Times, the American Broadcasting Company and possibly others (news stories are mentioning others). They are working to make sure nothing is redacted from what was found during the searches of his home. But more about this later.

Finally, the male attorney moved and I was able to see DeAngelo’s profile. There he was. Just a man. An old, craggy-faced man who didn’t look pleasant. He looked angry. He had whiskers on his face and he shoulders where slightly stooped. His mouth barely moved when he whispered to his female attorney. She appeared to be soothing him and making a point of touching him and talking very close. It appeared intimate and it nauseated me. There’s nothing in the lawyer handbook about mothering your client. I mean sure, someone go check the index, but I’m 99% sure it’s not there.

And then as quick as it started, it was over. The defense lawyers closed ranks again and we could barely see him slip out the door. He shuffled a bit and I wasn’t sure if he was shackled or not – one of the news stories said he wasn’t. The reporters would have had a much better look as they were behind him on the left side of the gallery.

How did it feel?

Reporters ask this all the time. The problem with the question is it misses so many things: the context, the history, the assumptions and the reality. I think it’s maybe easier describing two things I didn’t expect to feel.

The first is catching DeAngelo doesn’t bring closure. I have been saying this for the last two weeks – there needs to be a word for the opposite of closure. I guess beginning could work but it misses the nuance. This is like re-opening an old wound.

I was instantly validated when I asked the others in the courtroom this morning if they felt closure and they said no, it’s made all the memories come back. Those damn memories. Which lead to the nightmares and images of brutality that live in each of our minds in our own way.

It also adds a level of complexity to our lives I didn’t anticipate. I’ll give you one example: how does one stay involved in a trial like this and work?!  I’ve taken some time off but we are looking at months if not years for this case. I don’t know what the answer will turn out to be on this front.

The second feeling in had today, might be considered cognitive dissonance – but at an abstract level. I was looking at another human being, a man I might pass on the street or in the grocery store. He might have been with his daughter or granddaughter. I would think nothing of it. But this man has lived in my mind as a monster for 38 years. I don’t know what I thought he would look like, but I didn’t think he would look human. That maybe makes me the most sad. Because he was a dad and a grampa and literally nothing matters to him. He’s just left destruction in his path. Brutal, evil, dark, compulsive, destruction. And no matter what happens at this point, we can’t get any of the goodness that’s been lost.

There was a bit more to my day, but I have to stop and get some sleep – long drive from Sacramento back home. I am glad I went. I treasure that moment holding hands. The next hearing is on May 29th.

19 thoughts on “Today I Saw Joseph DeAngelo, The Golden State Killer, In Person for the First Time”