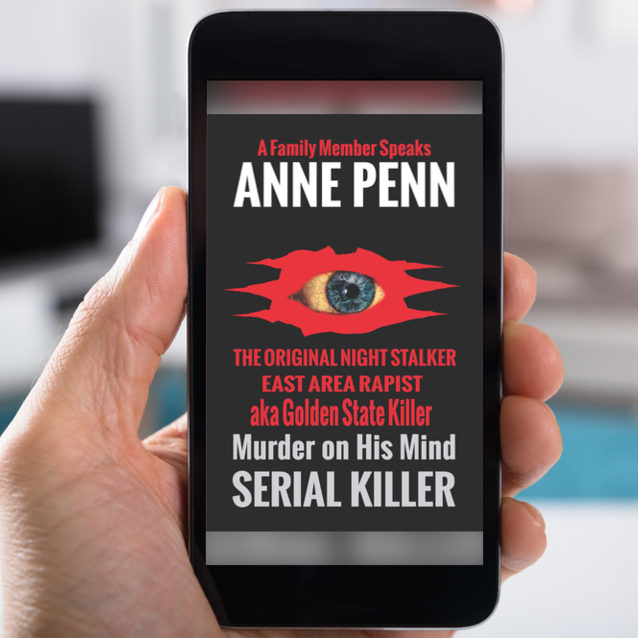 When Katie was born, the joke was she was born unto a family twig. We have no real family tree. I mean we do but it’s small. My dad’s family were definitely not breeders. Sure my dad had three kids, but if you asked him, that was because he had good genes (do you know how much I wanted to keep the typo of “good jeans!?!?”). But that was it. My uncle Don, my dad’s brother, hasn’t had any children. There’s a lot of family in Idaho, but they are removed from us and we were never really close. My uncle lives there now though and he’s happy as a clam, er um, fisherman. And that makes me happy!

[Note: I wrote this earlier this week because I’ve received so many questions about her. Quick update to this story below, under the graphic.]

[Second Note: November 9, 2018, Laurie has asked that I remove the link to the Jaycee Dugard article. Done.]

The first time was in early spring 2017.

I was working with Todd Lindsay on Unmasking a Killer.  I love working with folks like Todd; they start out with the usual questions but then, as they start digging, they come back with amazing questions make you totally respect their hard work and dedication. Todd asked great questions and when we got to where he was taping, there were even more things that impressed me. He really did a great job with the series. But one day, he did manage to stop me cold.

Todd: “I talked with your dad’s niece the other day…”

Todd: “Well, I’m trying to understand her role in all this.”

Me: “I have no idea. It’s my dad and his brother. There are no other relatives. We have a very small family.”

Todd: “Okay, it must be a kook. No problem. Crossing that off my list.”

The conversation was a little longer – we speculated a bit about who the heck it might be, but that’s the gist of it.

We talked about some other things and I hung up the phone completely convinced there was a nut job on the loose. The name I was given was Laurie XXX (since publication, Laurie has asked that I remove her last name. Seems reasonable so moving to xx’s) and that name meant nothing to me. When I Googled, the only thing that popped was a woman in Lake Tahoe who was involved in the Jaycee Dugard case and that seemed weird. She had been quoted in the story. It supported our kook theory because some people like to attach themselves to drama. And yet, we have a totally different murder that passed through our lives, so it could happen.

Fast forward to just after DeAngelo is arrested.

It’s May and I was still in the office so it must have been the very first week of May. I get a call from a newspaper in Tahoe. Didn’t think a thing about it. Returned the call to find they had just interviewed Lyman Smith’s granddaughter. I said that’s not possible, I have his only granddaughter in my house –  her name is Katie. This time though, the reporter had a different name: Anne Penn. My friend Patty is a freaking Internet sleuth and she figured out what was going on! She did it while I commuted home – it was awesome. She was able to untangle the mystery.

Since then, I’ve finally figured out a bunch of stuff that didn’t make sense to me. At my first court visit, I was surprised by the issues raised about Anne Penn. There was much to learn. The fact that this story ends with a rather incredible irony is just another brick in the wall. The hardest part for me is she has been representing our family and that should not have happened.

Among us, you guys know I’m not someone to call people out. I believe there are always two sides to every story and generally, I’m not litigious or punitive. Of course I have strong opinions, but I will also listen and modulate my ideas based on thoughtful discourse. I work hard to live by the Golden Rule and work hard to be truthful. I am doing this blog because Laurie has caused harm to people while acting as a member of our family. On behalf of my dad, Charlene and my grandfather (and uncle for that matter), deserve much better. I don’t want their reputations tainted by Laurie’s behavior. So here we go.

Despite what she’s told people, she does not represent us.

Colleen and I agree that there could be a connection to how ONS saw Charlene and one possibility is he could have seen her in Sacramento.
[page 456 from the self-published second edition]

Before this tragedy happened my grandfather had been happy and more accessible than others in my family.
[page 15 from the self-published second edition]

Now the irony. I feel compelled to share this ugly, family story.

Laurie speaks of how close she was to my grampa – and if so, yeah, he deserved all the love he could get – but here’s the thing, the actions of her family tell a different story. I hate that I have to share it but it’s important that folks understand. It makes me feel sick to even tell it.

Grampa and Max lived in Curtis Park in Max’s house. It was her house. That’s important. When Max died, the way I understand it from my Uncle Don, the house was left to Laurie’s mom with the caveat that my grampa could live there for the rest of his life. Cool. Very cool. But sadly, that’s not what happened. Instead, Laurie’s mom told my grampa he had to start making repairs to the place; substantial repairs. He needed to replace the plumbing and the roof. She held him financially responsible. That ended up putting him out – because it wasn’t his investment – and he had to find a new place to live. At that point, Max’s family “dropped him” cold. He’d spent about 30 years with them (and not us) because of Max’s manipulations and this multi-generational family who loved him so, kicked him to the curb. The man Laurie calls grandfather. Of course, we moved in quickly to help with the transition. Grampa was deeply hurt by being abandoned.

Not one of those people from Max’s family – from his 90th birthday party –  including Laurie, were there when he died.

So excuse me when I read a passage like this from Anne Penn/Laurie XXX’s book and I just want to scream.

For any who have said they did not have a family member with my name I beg to differ. My name is Laurie. It does not surprise me nor would it if Lyman Robert’s (Jen note: my dad) grown children have no memory of any of our names since we were not raised near each other. Lyman Senior (Jen note: my grampa) was grandfather to 7 grandchildren and several great grandchildren from our side of the family. …He served as grandfather to me and my brothers, to my children and all of the children in our family. I am grateful.

It’s not what you say, it’s what you do that indicates character.

No Laurie, we don’t have anyone in our family with your name.

You do you. The non-Smith version. Thanks.

[Update: It’s Sunday the 28th around 4pm. For some reason, Laurie finally saw my blog about the Myths and started getting agitated. It’s an odd position, since I know she barely spent any time with my dad, likely even less with Charlene, and she’s has no understanding of their lives or ours. Her responses are generally the same. Here are a few so she will know you could see them:

On the Myths blog I wrote, her comment at the very bottom.

And we have private messaged on Twitter – very similar tone. She’s a victim, she’s a person, she was raised by my grampa. This doesn’t explain the behavior, her comments only beg, over and over, to accept her as a victim. What she never explains is why she didn’t want anyone to contact us. Why she needed to be in everything and why, WHY, her family left my grampa when Max died. All the kids he had raised just walked away. If there was so much damned love, why did they hurt him so badly?

There’s a passage Laurie wrote in the comment on my Myths blog. It confirms what I’ve asserted here. Laurie writes, “I had a great relationship with him for over 30 years. He was our grandfather.  I was there when he was sick and in intensive care, I was there for every birthday he had until my grandmother passed away.” And just like that sentence ends abruptly, so did his relationship with Max’s whole family.

I’m not pissed now. I was really pissed then. I am a softie for geezers – I adore them. When Laurie goes on and on about how she lived with grampa’s grief, I get it. I saw it. It’s how he felt when they all kicked him to the curb.]

*Oh! I’m planning some fun podcasts around her series. Stay tuned. I’m targeting early January and I will do them all at once! Promise!

5 thoughts on “The Mysterious Case of Anne Penn”