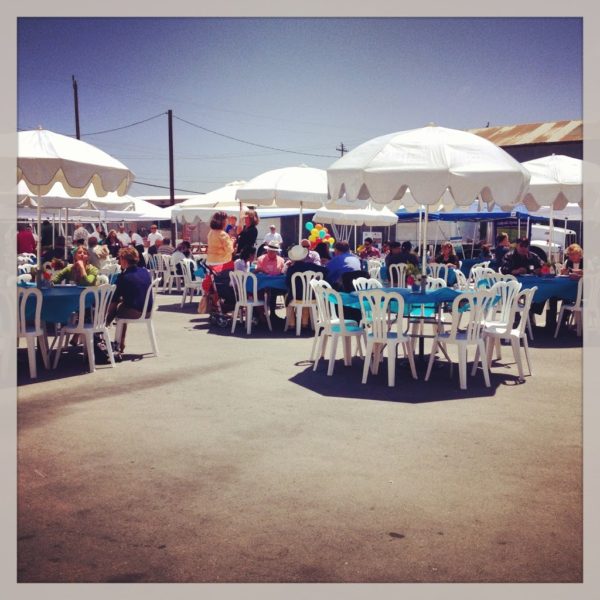 It was so easy.

All I had to do to lure them away was send them a text. And then they were mine!

Much to Katie’s chagrin – she really can’t complain, she’s off storming the South Pacific with People to People – I swiped her friends and took them to a food fest at the Second Harvest Food Bank in Watsonville.

My glorious partners in crime, Emelia and Eva, are Katie’s friends and they are wonderful, fun and appreciative. They accompanied me to the event to learn more about the food bank and the local service organizations and foods we have in Santa Cruz County.

Free Food at the Food Bank!

We got there to find a great spread – lunch! I wish I could remember which group made the food. It was tasty. Enchiladas, salad and if you look, that’s a tri-tip sandwich on Eva’s plate.

It was sunny and warm and it was fun to feast with the girls and dish about my daughter! Well not exclusively, but there was a little gossip about her flirting with some boys in New Zealand. I hadn’t heard that story. It was so good to get the “deets” (that’s slang for details if you aren’t hip – it’s probably actually old-school slang at this point).

After lunch Bly, pictured on the right, gave us a personal tour of the food bank. We started in the offices learning about their marketing efforts like The Waiters Race organized by Soif Wine Bar owner Patrice Boyle to celebrate the French holiday Bastille Day and raise money for the Watsonville-based charity Second Harvest Food Bank.

We rounded the corner and found the sign (right) that noted half the people served by the food bank are children. That one hit home for all three of us. We also saw this huge whiteboard that lists where food is being delivered and when. It’s a two week window of outreach that extends all over Santa Cruz County. Very impressive and real.

The warehouse was next and thanks to a great Capital Campaign, the bank has racks now to stack the food that’s donated from many places. It’s rather amazing to see stacks and stacks of donated food. One of the girls said it felt like a “Costco for good.” Couldn’t agree more. We passed by strawberries donated by Driscoll’s and Happy Boy Farms tomatoes and more.

We ended looking at the inside of a box of food that’s delivered to families based on the donations given in those food bins that show up at the holidays all over Santa Cruz County. In the photo on the left that says Food Drive, you see what a family might get. I saw two cans of anchovies and it took me a minute to force down my gag reflex. They are so gross to me.

Then I realized, if I was hungry, that would be food and I would be grateful. I am grateful that I am not that hungry and don’t have to rely on Sardines. Very, very grateful.

We walked outside to find Sam Farr talking with the gathering about his support of the Food Bank. When I snapped the photo, he was surrounded by Plantronics Interns who always seems to be on hand to help out at these events (wow).

Before we left, we visited the various booths set up around the event featuring local growers and plenty of great produce. I buried myself in raspberries – like gold at the store and I could have as many as I wanted! – and the girls tasted tomatoes, apples, strawberries and more.

They gave us bags and we were invited to take home produce. We all left with lots of fresh goodies from organic carrots and radishes to home grown plums, apples and berries.

The girls expressed interest in volunteering sometime soon; maybe to sort food. I was glad to have the chance to share such a good time with them. They were terrific company and made me miss my daughter just a little bit less.

Stealing kids is totally worthwhile – as long as their parents agree! I just hope Katie won’t kill me when she gets home!