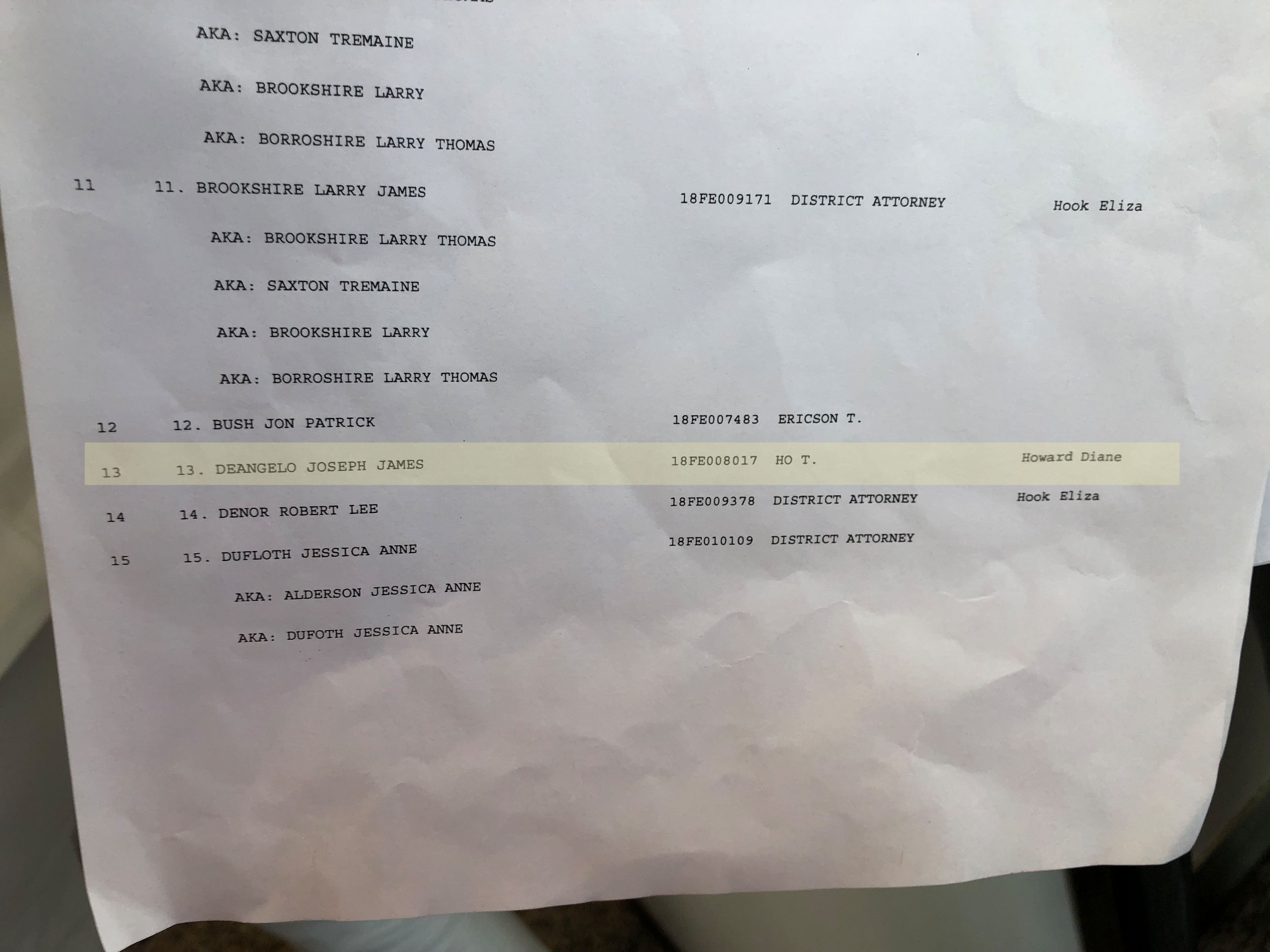 Yesterday, Memorial Day, it was quiet downtown near the jail. I was looking for a place for a “survivor coffee” after court. I passed a woman who looked homeless. She was bloody and I could see a lot of her battered body. Her clothes were tattered, maybe torn, her left shoe was missing and she looked as if she’d been ravaged. I drove back around the block to try and see how badly she was hurt. I struggled. Should I call for help? Then I always think about unintended consequences. Would the police come and arrest her for something and not respond to her condition? I decided not to call and tortured myself all night for my decision. This morning, on my way to court, I saw her again. She had bathed in the river (an assumption but very likely). She was wearing what looked like muslin around her like a towel. No other clothes. No other belongings. She was on the 16th Street bridge putting a single calla lily into a bottle, like a vase, and placing it on the bridge for all to see. It seemed like her way of saying goodbye.

Ah Sacramento – land of oven heat and refrigerator cold. It was hot today. I’m a wuss. I can’t handle the heat. We had a high of 98 – that’s actually not bad for Sacramento in the summer. I parked in the H Street garage and went down to the corner to wait for my Victim Services person, Ann. I was surprised when I was joined by a number of other survivors and their support people. As we gathered, there was actual enthusiasm among the squad. We realized we are growing in size and that felt good (see The Power of Women for more).

I slip/slide between the words victim and survivor and I want to take a minute to explain: for me, a survivor is anyone who was attacked by DeAngelo and managed to walk away. In my book, getting out alive is everyone’s first priority and I’m so proud of those of you who could do it. The victims are really those of us who lost the people we love to murder. Similarly, we buried our people, brushed ourselves off and moved forward and that is also survival as far as I’m concerned. When I bundle us together, I tend to say survivors because I want to acknowledge living with violent crime is hard and changes us. And I also realize many people who are interested in this crime, have had violent crime touch their lives too.

The courtroom – department 61 – is in the jail. There are three (maybe four) courtrooms that exist off this hallway that’s in the front of the building. We go through metal detectors, grab our purses off the conveyor belt and then “hang out” in this hallway waiting for the doors to open. Typically there are media there and we way hello to the reporters and cameramen (didn’t see any women) we know, and then Victim Services whisks us into the courtroom. Once inside, the lawyers come greet us, we push the limits of where we are allowed to sit and then we settle in. We are often in at 8:30 and court doesn’t really start until 9am.

These are old courtrooms. The seats are close together and they don’t want us to sit in the first row of the gallery behind DeAngelo because…I don’t know why. They tried to make some excuse about our safety, but honestly, they’d be better off saying it’s for his safety. I can’t tell you how much I want to be in that front row, breathing heavily with the occasional growl. I just want those hairs on the back of his neck to twitch knowing we are right behind him. There’s a sign, printed on 8.5 by 11 inch paper that says, “Do not talk to or make any type of contact with inmates.” Got it. I will restrain myself.

DeAngelo came in with a bit more vim and vigor this time. He entered through the cage door and I was satisfied to see his hands handcuffed behind his back. He has wide shoulders relative to his arm length and so the cuffs appeared to be a little uncomfortable. They weren’t as tight as the bindings he used to tie people up, so I knew he’d be just fine with the discomfort. He stood at attention the whole hour facing the judge or briefly looking at his lawyers. He didn’t look at us (he’s supposedly not allowed to). He didn’t flinch, rock, or do anything but stand at attention. Looks like Control will be playing a role in this proceeding. The only time his hands shook were in the final minutes when we were dismissed and he was waiting to get back out the door. His hands trembled but the rest of him remained composed.

Getting down to business.

As I shared in my other blog about the day’s arguments, we were there to hear the three different law teams point of view on what should and shouldn’t be kept private. I liked hearing the different positions: it’s a little insight into how they different teams think and their court demeanor. I was not impressed with the man representing DeAngelo today. He’s a little squirrely and I found his arguments to be superficial.

We spent the first few minutes in a heated debate between a bailiff and a photographer. Actually, one does not debate a bailiff. One says, “yes ma’am” and listens, unless you’re a reporter who’s been told something different than the bailiff. Apparently the judge allowed only one video camera and one fixed camera in the courtroom – to function as part of the media pool – meaning they had to share what they were getting with everyone else. Alas the AP understood they could be in the courtroom but the judge changed it up and said only the Sacramento Bee feed could be there. I may have this wrong in terms of who got the final okay, because it was an influx situation with lots of feelings. Needless to say, the bailiff won.

Once court began, I took notes like a beast but it was so hard to keep up. What did surprise me was the case law they referred to as justification for their arguments. You know these crimes are in another whole league when these are the cases they are citing as precedence.

[At some point during my rapid note taking, I look up and the bailiff that’s in the cage with DeAngelo appears to have fallen asleep on his feet. I smiled; seems no one is afraid of DeAngelo these days.]

It was interesting to hear Duffy Carolan, the media’s lawyer, talk about ways to ameliorate the potential downside of sharing the information. I love the word ameliorate. It’s a chewy word that is tasty when you say it and speaks to a way to right something wrong. She had a list of ideas that would mitigate the potential harm sharing information from the search warrant and search returns could do to prospective juror members (regardless of jurisdiction – so not just Sacramento, but Ventura, Orange and Santa Barbara counties as well.

There was a lot of discussion about the public’s right to know and case law was cited that shows “investigatory value doesn’t outweigh the public need to know” which, as I understood it, means there is value is us seeing progress being made and good police work being done. It restores the public trust in our institutions (if I understood this correctly). It was interesting to hear they talking about  a jury that may not be seated for as many as five years (WTF?!). When it all comes down to it, when we learn the venue for the first case, it will all be based on the “innoculation the jurors receive during voir dire,” as the judge explained.

And then the lawyers and the judge went “in camera“.

That means privacy! As I understand it, they began a point by point review of every piece of information in the search warrant to decide what we can see and what we can’t. [We know now that’s 123 pages of information. Those arguments (discussions) continued Thursday and their decision was finally made public on Friday.] While they went into session, we thought we were coming back for a decision, but it ended up taking the rest of the week.

When we returned to the courtroom at 2:15pm to find out if there was a decision, DeAngelo was brought back into the courtroom as well. I sat in roughly the same spot behind him but noticed the handcuffs had changed. This time, his hands were relaxed because they added an extra set of cuffs so it daisy-chained, allowing him to relax his shoulders and have very little tension on his wrists. Damn.

During this very short session, we were told the hearing would continue to Thursday. It was time to return to the heat (it was one hot day) and get back to our lives. Of course, for me, the best part of this day was being with the other survivors. I’ll never forget this day.