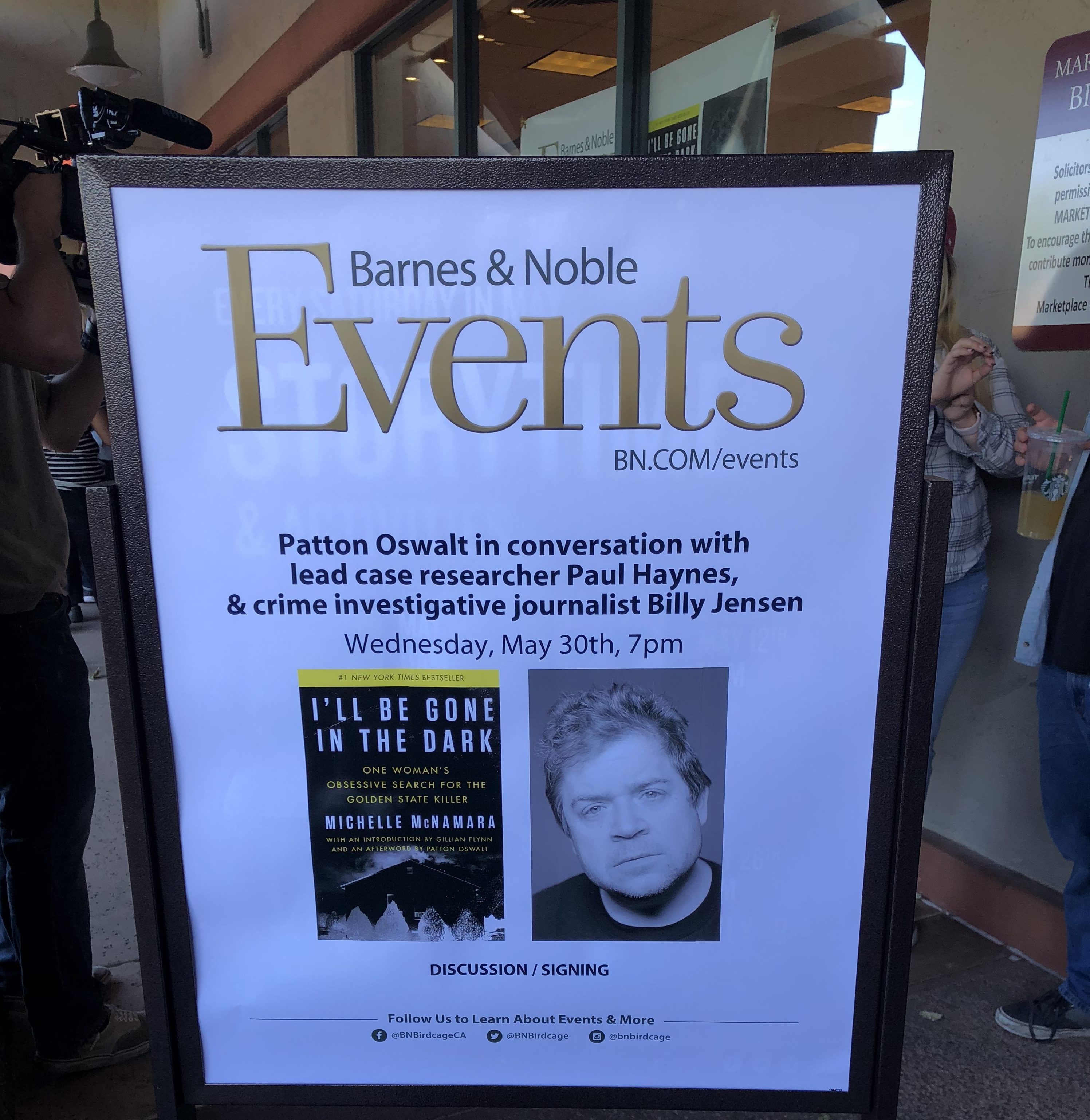 “Look for Karen,” Ray texted, “She’s coming up for the book event tonight!” Holy cow, I thought, she’s coming all the way to Citrus Heights to see Patton and crew? I knew Ray (and Karen) from my gig at WebEx, part of Cisco. I know East Area Rapist sleuths are a committed group, but I truly had no idea. I figured the evening would be busy and I had mixed feelings about going, but wouldn’t ya know it, the first person I saw when I got there was none other than Karen! She was like number 10 or 15 in line. It was so good to see a familiar face.

This was a big night. I’ve been thinking about how to do this post because a lot happened. So I think I’m going to break it into two parts (read part two). Part one – this one – I’ll focus on the support because I haven’t stopped being lifted by what happened last Wednesday. I’m serious. A crowd of 450+ people (ahh, the numbers, they are already starting to inflate. I feel so political!), a crowd of nearly 500 people filled the chairs, aisles, nooks and crannies of the Barnes and Noble in Citrus Heights. You can read the news reports if you want an overview, but here’s how it felt – and what it meant – to those of us who’ve lived this . insanity.

Little set up here: after court on Tuesday, I had a chance to watch some of the live feed from the courtroom on KCRA. When you watch like this, there’s a running chat window that let’s people react, comment and say nutty things (um, my word). I kept seeing this darn hashtag pop up, over and over, and I had no idea what it meant. I had intended to Google it but forgot, until I was stopped at the light on Greenback at Auburn Blvd. There, ahead of me, was the same hashtag in bumpersticker form! Don’t tell the CHP, but I Googled it right then and found out #SSDGM meant, “Stay Sexy, Don’t Get Murdered.” Color me confused. The light turned green and off I went.

I arrived around 4pm. As usual, the media trucks were already in place. What I didn’t expect was the line. I mean I knew there would be a line, but I didn’t know what kind of people would spend their day waiting to see Patton and crew talk. Turns out, pretty amazing people. I walked the line, talking with folks, thanking them for caring about this crime and had a chance to hear some of their stories. No matter what, when anthropologists study this crime, I hope they focus on what I’ve found. Fear didn’t make people run from one another; fear brought people together. It seems from the start, when the terror was high, folks looked out for one another. Have to say, it’s still happening.

[I was going to add photos here but there are too many, so I’m putting them below.]

I unlock the secret code.

As the line queued, I grabbed a quick bite at Starbucks, which was graciously paid for by Erin Newbold who was right in front of me in line and recognized me. It’s so stinkin flattering when that happens. You guys have no idea how your support feels – it’s amazing. Melanie was on her way and they were going to stick us in the very front for the talk. It was barely 5pm when the store decided to let folks in. And that’s when the real fun began!

Within minutes, folks filled the chairs and the buzz of excitement started. I took a look at the crowd and I’ll be damned if a woman wasn’t wearing a #SSDGM shirt! Finally! I would get some answers. Turns out, it’s the motto for the fans of My Favorite Murder – a podcast I’d love to be on one day (hint hint). These fans are also known as Murderinos and they wore their commitment to their fandom proudly (look at all the Murderino shirts in the photos!). I immediately took to them. Most of them were women – okay, like 95% of the audience was female – and they were smart, sassy and savvy. Some of my favorite S words.

Then someone asked me to sign their book. Really, I thought, I didn’t write it. But there were the pictures of my dad and Charlene. Both of them in their high school yearbook photos, looking young and fresh and ready to conquer the world. Sure. I’d sign it. And with that, I ended up signing maybe 100 books – working the crowd (I loved talking with you guys) and getting to meet so many people who lived through the East Area Rapist or grew up knowing about it from their families. The very idea that we were all there together with a suspect in custody made us all a little euphoric.

Did I mention HBO was there?

HBO has optioned the McNamara book for a documentary. They are still deciding how they want to tell the story and which aspects of the story to tell – I argued this is a multi-season series at a minimum – and they were filming this event as part of the production. Everyone in attendance were put on notice, they could be filmed! That probably explains why everyone looked so pretty.

As we assembled, the press was on the left, in the front, and the HBO crew was all over the place. Three chairs were set at the front of the room with three microphones. With multiple introductions, the guys finally arrived and the discussion got started. Patton sat on the right (facing the crowd), Paul Haynes in the center and Billy Jensen on the left. Rather than any formal remarks, the guys immediately took questions from the audience.

At this point, I have more to say about the talk, but I’m going to put that in part two.

Come back to the Green Room.

As the talk concluded, they whisked us (the survivors) and speakers back to the Green Room. That’s funny because it was really the store’s break room for the employees. I didn’t realize we would have time alone with the guys. Had I known, I might have held one of my questions for afterward. Patton, Paul and Billy spent time with the survivors which was really wonderful. HBO was filming so if anything good happened, I’m sure we’ll find out. I realized I hit the wall and I headed out.

The bookstore was almost empty.

The team had nearly put the whole store back together. I walked outside and reporters were filing their stories. I had parked way in the back and as I approached my car there was another woman getting into her car. I asked her if she enjoyed the evening. She had and then we talked a bit. I don’t even remember what we said, but it was just what I needed to make the transition and get back in my car to head home to the hotel.

What a night. Thank you all for being so amazing. [Read [art two.]

4 thoughts on “Citrus Heights Barnes and Noble Was Packed with Stories, Interest and Support”